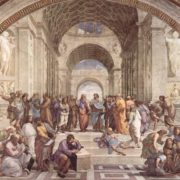 “… For thousands of years ancient civilizations, such as those of the Persians, the Assyrians, the Babylonians, saw man as an abominable being crawling before deities and tyrants.

The Greeks, however, took the man and put him on his feet. They taught him to be proud …

The world is full of miracles, Sophocles said, but nothing is more wonderful than man.

The Greeks convinced man, as Pericles put it, that he was rightfully the possessor and master of himself, and created laws to safeguard his personal freedoms.

The ancient Greeks encouraged the curiosity that man had for himself and for the world around him, declaring together with Socrates that a life without research is not worth living.

The Greeks believed in perfection in all things, that is why they bequeathed to us the beauty that comes from the Parthenon and the Greek statues, the tragedies of Aeschylus, Euripides and Sophocles, the poetry of Hesiod and Homer, until painted vases of a simple household.

Without the Greeks we might never have realized what self-government is.

But, much more even than our language, our laws, our logic, our standards of truth and beauty, we owe to them the deep sense of human dignity.

From the Greeks we learned to aspire without restrictions, to be, as Aristotle said, immortal as far as possible … “.